Much has been stated, debated, alleged and insinuated about that letter by Judge Harhoff to 56 of his friends and associates about the “tenacious pressure” applied by Judge Meron on his fellow judges for the acquittals in the Ante Gotovina et al and Momcilo Perisic appeals and the alleged political influence of the US and Israeli governments in those acquittals. 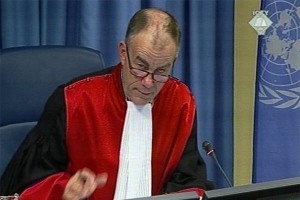 The impropriety of the letter and need for a binding code of conduct for judges and prosecutors (to complement the existing code for Defence Counsel) has been discussed over at the International Criminal Law Bureau blog and Opinio Juris.  A blog post at Balkan Insight also provides a legal analysis of the acquittals in question to argue that it is not so much the law that has changed, but the fact patterns in the recent cases. The New York Times has also reported that Judge Harhoff is not alone in his criticism of Judge Meron and there is a movement afoot amongst ICTY judges to vote in another candidate for ICTY President this fall.

Disclosing confidential information about the deliberations of the Appeals Chamber (of which Judge Harhoff did not take part) and proposing unsubstantiated conspiracy theories is improper, as these blog posts have discussed in detail. The focus of this post, however, is Judge Harhoff’s comments on the Perisic Appeal and his  analysis of aiding and abetting liability (which, incidentally, was decided by a 4-1 majority, not 3-2 as stated in the letter).

On the Perisic Appeal, Judge Harhoff’s letter states the following:

Shortly after [Gotovina’s acquittal], the Appeals Chamber struck again with the acquittal of the Serbian Commander Chief of Staff, General Perisic, when the Chamber decided that even though his military and logistical support from Serbia in the Bosnian-Serbian forces in Bosnia had contributed to the forces’ crimes against Bosnian Muslims and the Bosnian Croatians in Bosnia, Perisic had “not intended” for his forces to be used to commit crimes. He provided the support, but was unaware, according to the Appeals Chamber, that the support would be and was used to commit crimes in Bosnia.  This despite the media’s daily coverage of the Bosnian-Serbian forces’ macabre crimes against Muslims (and to a less extent Croatians) in Bosnia. […] Now apparently the commanders must have had a direct intention to commit crimes – and not just knowledge or suspicion that the crimes were or would be committed.

This is simply incorrect.  The Perisic Appeal Judgement actually affirmed the knowledge standard (as opposed to intent) as the requisite mens rea for aiding and abetting liability. However, with regard to the actus reus, it held that since the Bosnian Serb army engaged in both lawful and unlawful activities, Perisic’s assistance must have been “specifically directed” to their criminal activities to incur individual liability (citing the definition of aiding and abetting from the Tadic Appeal Judgment). The Appeals Chamber stated the following at paragraph 44:

[I]n most cases, the provision of general assistance which could be used for both lawful and unlawful activities will not be sufficient, alone, to prove that this aid was specifically directed to crimes of principal perpetrators. In such circumstances, in order to enter a conviction for aiding and abetting, evidence establishing a direct link between the aid provided by an accused individual and the relevant crimes committed by principal perpetrators is necessary.

Since Perisic’s involvement in providing general assistance was deemed to be remote and not “specifically directed” to the relevant crimes committed by the Bosnian Serb army, he was acquitted of aiding and abetting liability.

Judge Harhoff’s letter decries the Perisic acquittal, and subsequent trial-level acquittals of Jovica Stanisic and Franko Simatovic, all of which resulted from the “specific direction” requirement.  Now here is the interesting part.  In the Stanisic and Zupljanin Trial Judgment, dated one month after the Perisic Appeal Judgement, Judge Harhoff explicitly endorses the “specific direction” requirement at paragraph 107, citing Perisic approvingly:

107. Aiding and abetting is a form of accomplice liability. The Appeals Chamber has held that:

an aider and abettor carries out acts specifically directed to assist, encourage, or lend moral support to the perpetration of a certain specific crime, which have a substantial effect on the perpetration of the crime. […] The requisite mental element of aiding and abetting is knowledge that the acts performed assist the commission of the specific crime of the principal perpetrator. [emphasis added, footnotes omitted]

The question that remains, is if Judge Harhoff was so outraged by the legal and factual conclusions of the Perisic Appeal Judgement, why did he then endorse the very point of law that resulted in the acquittal of Perisic, as well as Stanisic and Simatovic?  What recourse does a trial judge have when he/she disagrees with the Appeals Chamber on a point of law?

Judge Harhoff could certainly have written a separate and dissenting opinion on the specific direction requirement.  Trial judges have disagreed with the Appeals Chamber in the past, notably Judge Lindholm who filed a separate and partially dissenting opinion to the Simic et al Trial Judgement to “dissociate [him]self from the concept or doctrine of joint criminal enterprise in this case as well as generally”. Judge Harhoff could even have used some of the “tenacious pressure” that Judge Meron is accused of to persuade his fellow trial judges to follow his lead (the late Lord Denning would certainly have been proud). But instead he undermined the tribunal for which he serves by disclosing confidential information about deliberations he was not a part of, second guessing the outcome of those deliberations (at least privately), and displaying the appearance of bias towards convictions.

What this letter provides is a rare glimpse into the opaque world of a judge’s privately-held views and biases.  If Judge Harhoff’s “official view” endorses the specific direction requirement and yet his personal view is that it leads to unwanted acquittals that are not in the “interests of the victims”, it is difficult to see how this would not lead to his removal from the Seselj case for the appearance of bias, as has been requested.   A panel of three judges is now considering the request.

Update: Thanks to Luka Misetic for alerting me to a similar point he made regarding the Stanisic and Zupljanin Trial Judgement in a comment to an earlier post at EJIL Talk.

2 thoughts on “Judge Harhoff, Specific Direction and the Perisic Acquittal”