Just a short note for those interested in the Congo (Dem. Rep.) and its history. David van Reybrouck‘s 600-page, 2010 history has been released in English by HarperCollins, translated by Sam Garrett. Originally published in Dutch as “Congo: Een geschiedenis” (Congo: A history) and now in English as “Congo: The Epic History of a People”, this book has received very positive reviews and a number of awards as a history that is both thorough and accessible. 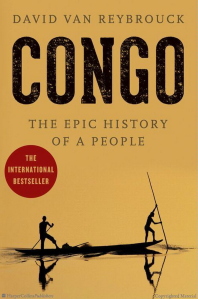 One thing I’ve heard and seen in reviews is that van Reybrouck uses the “everyday” lived experience of Congolese to weave together a rich and compelling narrative of a history whose treatments can feel overly exotic or impenetrably complex. Not having actually read the book myself, though, I’ll stop there and point readers to those who have (from AllAfrica):

Indeed, Van Reybrouck would have little difficulty finding written sources from European missionaries, tradesmen and slavers who first arrived in the country in 1482, but it was the personal testimony of Congolese people today that was of most interest to him. He wanted to hear from the people whose life stories collectively make up the turbulent history of the African giant. But rather than merely asking his interviewees about their opinions of times past, Van Reybrouck wanted to know what his informants ate, what clothes they wore, what their houses looked like when they were children, and whether they went to church. It is from this tangle of everyday facts of life that Van Reybrouck spins a fine thread with which he eventually knits together this detailed and well-researched biography, thoroughly rooted in the lived experience of the Congolese.