Rosemary Grey joins Beyond The Hague again with a post on recent steps taken in Australia to bring the Government’s treatment of asylum seekers before the ICC. Rosemary Grey is a PhD Candidate at the School of Social Sciences, Faculty of Arts and Social Sciences, University of New South Wales. Rose can be reached at r.grey@unsw.edu.au and here. 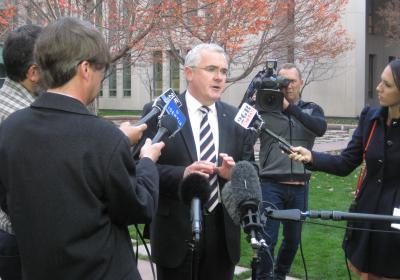 “Andrew Wilkie takes Australia to international criminal court”, the Guardian announced on Wednesday. Well yes, in a manner of speaking. Australia itself can’t be taken to the International Criminal Court (ICC), which has jurisdiction to prosecute individuals rather than States. And there are many, many steps that the ICC Prosecutor would need to take before any individual Government ministers could be summoned to The Hague.

But Andrew Wilkie, an independent of member parliament in Australia, has taken an initial step to bring the Government’s treatment of asylum seekers before the ICC, as the Guardian’s report continued to explain.

Specifically, Mr Wilkie has sent a letter to the ICC Prosecutor, asking her to investigate whether members of the Australian Government, including Prime Minister Tony Abbott and Minister for Immigration & Border Protection Scott Morrison, may be individually responsible for crimes against humanity under the Rome Statute.

Mr Wilkie’s letter focuses on the Australian Government’s policies of transferring asylum seekers arriving by boat to offshore detention facilities in our pacific neighbours of Papua New Guinea and Nauru.  The letter also says the Government has put ‘large numbers’ of asylum seekers at risk by sending them back to countries from which they have fled, including Afghanistan and Sri Lanka.

The implementation of these policies, Mr Wilkie argues, may amount to crimes against humanity under Article 7 of the Rome Statute, including ‘imprisonment or other severe deprivation of physical liberty in violation of fundamental rules of international law; deportation or forcible transfer of population; and other intentional acts causing great suffering, or serious injury to body or to mental or physical health’. Mr Wilkie has asked the ICC Prosecutor to initiate an investigation into these crimes proprio motu (on her own motion), using her powers under Article 15(1) of the Statute.

In support of his request, Mr Wilkie points to a number of independent enquires into detention facilities by the Australian Human Rights Commissioner, the United Nations and NGOs. He also refers to several whistle-blowers who have recently spoken out about the ‘inhumane conditions that members of the Australian Government are intentionally afflicting upon individuals seeking protection in Australia.’

In a press conference on Wednesday morning, Mr Wilkie was upfront about the aim of this request. ‘First and foremost, I want a change of Government policy,’ he stated, ‘this is all about the Australian Government developing a legal and an ethical response to asylum seekers.’ He continued:

Surely when someone comes to our border and claims to be fleeing persecution, we should do what we’re able to do and have signed up to do, which is to give them protection, hear their claim, and give them refuge if their claim is found to be accurate … I just want the Government to start acting like the Government of a rich and civilized country, start acting like a signatory to the Refugee Convention.

I asked Mr Wilkie how his request to the ICC Prosecutor would achieve that aim, given that a prosecution in The Hague – even one resulting in a conviction – would not automatically lead to a change in policy. He explained:

The ICC obviously can’t force the Australian Government to do anything. But I would hope that an adverse finding at The Hague would carry such weight that Canberra would feel obliged to adjust its policy settings to some degree at least.

One would hope so. However, the Government has not always been responsive when international bodies have criticised its policies towards asylum seekers in the past. As Professor Jane McAdam, Director of the Andrew & Renata Kaldor Centre for International Refugee Law at the University of New South Wales, observes:

The UN Committee against Torture and the UN Human Rights Committee have found on multiple occasions that aspects of Australia’s asylum policies violate international human rights law – in particular, the prohibition on arbitrary detention, and the prohibition on cruel, inhuman or degrading treatment.  The Australian government’s response has simply been to say that it takes a different view, and it won’t be told what to do by an international body.

In this context, it’s not clear that Mr Wilkie’s request to the ICC Prosecutor will have the political impact that he seeks. Time will tell.

Mr Wilkie’s request will not necessarily lead to an ICC investigation: this depends on a number of legal issues. The first relates to the Prosecutor’s power to trigger the ICC’s jurisdiction on her own motion, as Mr Wilkie requests.

As many readers would know, the ICC Prosecutor has the power initiate a ‘preliminary examination’ on her own motion, after receiving information on crimes within the jurisdiction of the Court.[1] She can do so where the alleged crimes were committed on the territory of a State Party, or by a national of a State Party.[2]  This includes Australia, a State Party to the Rome Statute since July 2002.

If the Prosecutor did opt to open a preliminary examination, she would then need to consider three threshold questions to decide whether to formally open an investigation into the alleged crimes: is there reasonable basis to believe crimes within the jurisdiction of the ICC have been committed; would the potential cases be admissible before the Court (taking into account the principles of complementarity and gravity, as set out in Article 17 of the Rome Statute); and are there substantial reasons to believe an investigation would not serve the ‘interests of justice’?[3]

Each of these threshold questions contains a multitude of legal issues and evidentiary challenges – too many to cover here. However, a key issue relating to the first threshold question (jurisdiction) would be whether the acts to which Mr Wilkie refers, i.e. deportation, deprivation of liberty and other acts causing great suffering, constitute crimes against humanity under Article 7 of the Rome Statute.

Clearly, those acts can amount to crimes against humanity under Article 7(d), 7(e) and 7(k), but only when committed ‘as part of a widespread or systematic attack directed against any civilian population’ pursuant to a ‘State or organizational policy’. If these ‘attack’ and ‘policy’ elements aren’t present, then the acts don’t constitute crimes against humanity within the jurisdiction of the ICC, however cruel or unethical they may be.

In terms of the ‘policy’ element, Mr Wilkie’s letter refers to a number of Government policies ‘designed to deter persons arriving by boat from seeking protection in Australia’. The letter doesn’t specifically identify a ‘widespread or systematic attack’. However, barrister Greg Barns, who Mr Wilkie consulted when writing the letter, elaborated on this issue for me.

Mr Barns indicated that the ‘civilian population’ were the men, women and children travelling to Australia by boat, and the ‘attack’ referred to the Government’s acts of detaining them without trial, subjecting them to inhumane conditions in detention, and detaining children. He suggested that Mr Abbott and Mr Morrison might bear individual criminal responsibility for the crimes allegedly committed as part of this attack, because they were the ‘architects of the policy settings’.

Can Mr Wilkie’s request succeed? Well, it would be a long road ahead – and that’s only to open an investigation. Getting a case up and running in the ICC would be a slow and expensive process, and there’s no certainty the case would go to trial. There is also no guarantee that it would bring about the policy change that Mr Wilkie seeks.

Still, this attempt to bring Australia’s treatment of asylum seekers to the attention of the ICC is an effective way to thrust this issue into the limelight, and might put greater pressure on the Government to reckon for its actions in the court of public opinion, at home and abroad. It also raises some broader questions about the ways that political actors may engage with the ICC for strategic purposes, by sending requests to the ICC Prosecutor pursuant to Article 15 of the Rome Statute.