On 21 May 2013, the Republic of Uganda became the first state in Africa to publish a comprehensive Draft Transitional Justice Policy. Six years after the Juba Peace negotiations between the Lord’s Resistance Army (‘LRA’) and the Government of Uganda (‘GoU’) ended without being formally signed by both parties, the GoU has committed itself to implementing an holistic Transitional Justice policy, designed to address issues of accountability, reparation and reconciliation in post-conflict Uganda. While still a ‘draft’ policy, it marks an historic step by the GoU in creating a framework designed to implement the provisions of the ‘Agreement on Accountability and Reconciliation’, Item no. 3 of the Juba Peace Agreement. 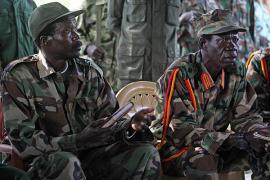 At the beginning of the Juba negotiations, Joseph Kony and his deputy Vincent Otti sit inside a tent at Ri-Kwamba in Southern Sudan. (Photo credit: CSMonitor)

In summary, the draft Ugandan policy provides for the following central interventions:

On the five commitments listed above, some brief reflections:

–       Witness Protection: Regarding the participation of witnesses in formal justice processes, ensuring their protection and confidentiality in trial settings will be crucial. To this end, a draft Witness Protection Bill has been before the Ugandan Parliament since 2012 but to date has not been ratified. Passing such legislation and putting in place appropriate protective measures will encourage victims to confidently testify without fear of reproach. 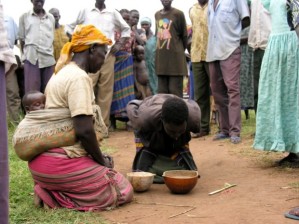 –       Traditional Justice:  In many African cultures, localized traditional mechanisms of dispute resolution have long culturally usurped those of formal state processes, which can be notably absent in post-conflict settings. In Northern Uganda, traditional ceremonies such as mato oput have been pivotal in reintegrating formerly abducted persons forced to fight with the LRA back into their communities. Formal recognition of such processes will further enhance their legitimacy in the eyes of the general population. Such processes also have the potential to tackle other post-conflict legacy issues such as land conflict, which remains a ongoing conflict-driver in northern Uganda.

–       Truth-telling: One of the most consistently stated priorities of victims in northern Uganda has been their desire for truth, to know what happened in their communities and who was responsible. Such processes are not intended to attach criminal accountability, but rather to establish an historical record, providing a cathartic outlet for victims and perpetrators alike to tell their stories. Key to any such truth-telling initiative will be its ability to document an accurate and equitable truth. The conflict in northern Uganda had two parties, the LRA and the Ugandan People’s Defence Forces (‘UPDF’). Many people will be aware of the atrocities committed by the LRA and their brutal strategies of child abduction and forced conscription. However, victims have also recounted abuses widely committed by the UPDF, including looting and forced displacement. For any truth-telling process to be legitimate in the eyes of the people, it must reflect and document their life experiences in an accurate and impartial manner.

The Uganda Human Rights Commission, the state body charged with monitoring and investigating human rights violations in Uganda, is in the process of establishing one of the most ambitious documentation projects ever undertaken in the country. Last year, I had the privilege of being part of the pilot-testing of this initiative while working for the UN Office of the High Commissioner for Human Rights in Gulu, northern Uganda. The project is designed to document war crimes and crimes against humanity across the greater north, dating back to the beginning of the LRA conflict, with a team of field researchers to be recruited and begin documenting in the coming year. Their task is indeed a daunting one, and their mandate has yet to be concretely defined, but such efforts will contribute greatly to realizing victims’ right to truth.

Reparations – Implementing a fair and equitable reparations program in Uganda will be immensely challenging. There are many questions to be answered, for example, should reparations be individual or collective? Should they come in monetary form or in the guise of community services? Given the scale of the conflict and the sheer number of victims, a key issue will be Uganda’s ability to resource such a program. Compensating individually may ultimately prove to be administratively impractical and counter-productive, potentially causing resentment both within and between communities. The recent reparations decision following the Lubanga Trial Judgment at the International Criminal Court favored collective and community-based reparations. In the context of limited resources, a community-based approach is perhaps more realistic and more likely to promote social cohesion and reconciliation in the longer-term. Victims may, however, point to ex-LRA combatants who received a ‘resettlement package’ upon the granting of amnesty, which included a monetary payment of 200,000 Ugandan Shillings (about 80 US Dollars). This has lead to the perception among some victims that ex-LRA fighters were rewarded for their role in the conflict, with victims not receiving any comparable individual reparation. The draft policy states that victims will be identified for the purposes of implementing a reparations programme, but does not explicitly favor individual over collective reparation.

A ‘reporter’ holds up her certificate of amnesty (Photo credit: The Vancouver Sun).

Amnesty – The draft policy states that ‘there will be no blanket amnesty’. This stance is somewhat confusing and contrary to recent legislative developments. The Amnesty Act 2000, which has facilitated the return of over 13,000 ex-LRA combatants since its inception, was recently fully reinstated after the section which granted amnesty lapsed in May 2012. It has now been extended until May 2015 and will continue to incentivize LRA combatants remaining in the bush to defect and return home. There are currently no conditions attached to the granting of amnesty, which grants immunity from prosecution to those ‘who renounce rebellion’. To date, the practical utilisation of amnesty has in fact been to grant blanket amnesty for acts of rebellion. The botched trial of former LRA commander Thomas Kwoyelo has further shown that amnesty has so far withstood judicial scrutiny in the Ugandan courts.

Making this Transitional Justice policy a reality will take time. Indeed, the draft policy recommends that a putative Transitional Justice Commission be given a ten-year mandate to oversee its realization. It also calls for a Transitional Justice Act, to provide a legal basis for the abovementioned structures and processes. It marks an historic point in Uganda’s transition from conflict to peace and reconciliation, with the clear commitment that victims’ interests are rightfully placed to the forefront of future transitional justice initiatives.